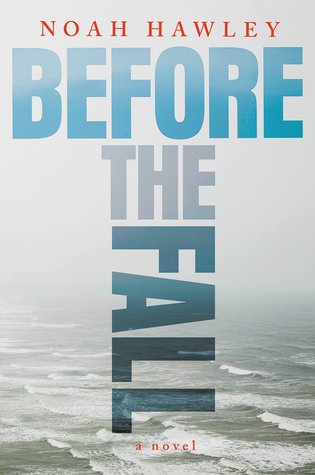 “Everyone has their path. The choices they’ve made. How any two people end up in the same place at the same time is a mystery. You get on an elevator with a dozen strangers. You ride a bus, wait in line for the bathroom. It happens every day. To try and predict the places we’ll go and the people we’ll meet would be pointless.”

So sets the stage for new summer thriller, Before the Fall by Noah Hawley. Eleven people get on a private plane from Martha’s Vineyard in what they think will be a quick flight home. The plane crashes and the only survivors are a four year old heir to a media mogul and a struggling painter no one knows named Scott Burroughs. Why was he on the plane with very rich people? How did he survive along with a young boy who is to inherit everything? Was it sabotage? Mechanical failure?

The nonlinear, suspenseful and intricately plotted novel reads just like a mini-series television show. And it should. Author Hawley is one of the writers and producers for series, Fargo and for Bones when it was on the air.

This isn’t usually my go-to type of read but it definitely was something that I needed after a few heavier novels and it was very well written. I can see it winding up on a lot of summer reading lists and it’s one of those books where casting the characters is also part of the fun.

The chapters are short which gives it that fast paced feel and the reader hears from all of the characters. Each person who died on the plane comes to life with Hawley’s excellent character development and the secondary characters- FBI agent, NTSB investigator, family members of the deceased, friends and coworkers- also have bigger roles to help piece together what happened. There is also some very telling media behavior displayed by a friend of the media mogul, who doesn’t mince words on the air. Reading about the media frenzy and all of the side stories that occur when tragedy strikes, made me remember why I don’t watch much TV anymore. Well those channels at least. The only person who really knows what happened isn’t talking and it’s Scott Burroughs. He’s hiding out and naturally his memory is scattered. Is it trauma or is he trying to hide something?

I received an advance reading copy of Before the Fall from Grand Central Publishing at BEA. I was not required or compensated to post a review. Quotes used may have been changed in the final copy which was released May 31, 2016. Pick up a copy at your local library. You won’t be able to put it down!

2 thoughts on “Before the Fall by Noah Hawley”