We all say it as a new month begins…where does the time go? I can’t believe it’s already August with the summer winding down and school starting in a few weeks. It’s been a crazy, hectic summer on my end and I haven’t read as many books as I would have liked but each new month brings new books that I am excited to check out. We all really don’t need to add more titles to our TBR list but I love perusing the catalogs and seeing what is on the horizon for new releases. If anything, bringing awareness to debuts and up and coming authors is something I enjoy doing. I originally had almost 30 books on my August tab in Edelweiss and culled it down to these ten: 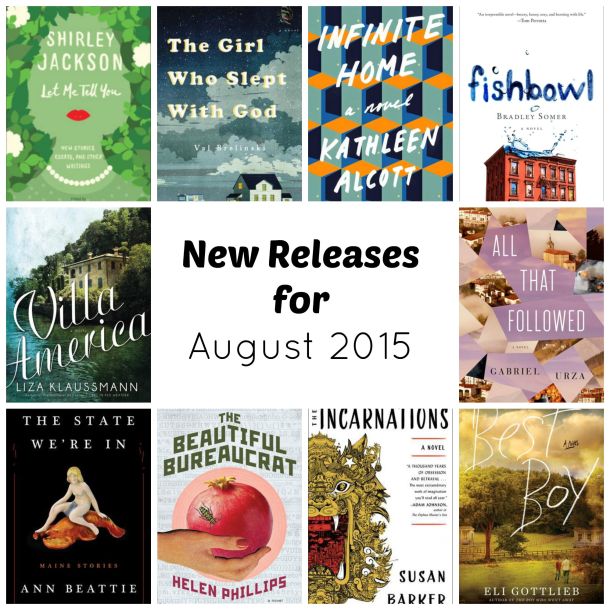 The book I’m most excited for is Let Me Tell You by Shirley Jackson. Jackson’s The Lottery is the short story that made me fall in love with shorts and I’m looking forward to this unpublished and unreleased collection of short stories, essays, lectures, letters and drawings by the influential American author with an edge. I’m not even requesting this one at the library but purchasing one to add to my shelves. (Aug. 4th/448 p./Random House)

The Girl Who Slept With God – Val Brelinski (Aug. 4th/484 p./Viking) This debut set in the 1970s follows three sisters from an upstanding family and one returns from a retreat pregnant with God’s child. Anyone see the movie Agnes of God? It was interesting to say the least and I’m curious to see how this story plays out.

Infinite Home – Kathleen Alcott (Aug. 4th/336 p./Riverhead) We’ve all read those books with an eclectic cast of characters and this book sounds like no exception. A widow named Edith rents out her brownstone in Brooklyn to numerous people who are desperate for shelter for one reason or another. They all have obstacles to overcome as does Edith and her devious son Owen.

Fishbowl – Bradley Somer (Aug. 4th/304 p./St. Martin’s Press) Don’t you love finding that book that is unlike any other? Ian’s fishbowl sits on the 27th-floor and has always wanted an adventure. When the opportunity arises, he jumps from his bowl and as he descends, looks into each tenant’s apartment to see how the other half live. Oh, if and you didn’t guess it, Ian is a goldfish.

Villa America – Liza Klaussmann (Aug. 4th/432 p./Little, Brown & Co.) I’m a sucker for coastal covers and this type seems to be everywhere these days. Sara and Gerald Murphy were expats who moved to the French Riviera in the 1920s and partied with the likes of the Fitzgeralds, Hemingways, Picassos and that wild crowd of artists. I LOVED Mrs. Hemingway and while caught up in Ernest’s affairs, I always wanted to know more about the Murphys.

All That Followed – Gabriel Urza (Aug. 4th/272 p./Henry Holt & Co.) This debut caught my eye with this description: “Inspired by a true story, All That Followed is a powerful, multifaceted novel about a nefarious kind of violence that can take hold when we least expect.” Yes, I like my darker novels and this one set in a small town in Spain has thriller/mystery/psychological twist written all over it.

The State We’re In: Maine Stories – Ann Beattie (Aug. 11th/224 p./Scribner) I have yet to read any short stories by Beattie and think this collection will be the start. These are “linked stories that perfectly capture the zeitgeist through the voices of vivid and engaging women from adolescence to old age.” And what is on that cover?!

The Beautiful Bureaucrat – Helen Phillips (Aug. 11th/ 192 p./ Henry Holt & Co.) I don’t even know how to describe this horror/mystery/sci-fi/dystopia novel. I’ve read very few reviews about it but hear I just need to dive right in. Click on the title for the synopsis and you just might be as intrigued as I was.

The Incarnations – Susan Barker (Aug. 18th/384 p./Touchstone) The Incarnations weaves Chinese folklore and history in this book “about a Beijing taxi driver whose past incarnations over one thousand years haunt him through searing letters sent by his mysterious soulmate.”

Best Boy – Eli Gottlieb (Aug. 24th/256 p./W.W Norton & Co.) I have an affinity for books dealing with mental illness and in Best Boy, Todd Aaron is in his fifties and eager to leave his therapeutic home after being there since he was eleven. A new resident disrupts his routine comforts and makes him think about the life he once had as a child.

What new releases are you looking forward to in August?