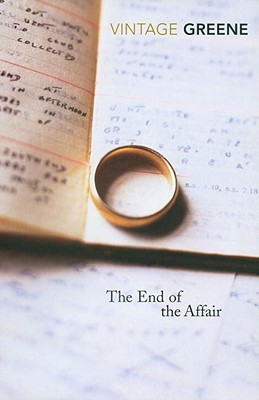 “So this is a record of hate far more than of love.” ~Maurice Bendrix

Maurice Bendrix is a character so full of hatred and jealousy, that I absolutely loved him! 🙂 Every snide comment and rude observation was from of a place of jealousy. Jealous of what he couldn’t have, what he lost, his struggle with belief. I felt sorry for him at times, but mostly enjoyed his wallowing. I chalk that up to superb writing!

I have wanted to read the classic The End of the Affair (1951) for some time but when I heard that Colin Firth narrated the audio version and add that with a looong car trip for vacay, it was a match made in heaven. Until about 3/4 of the way into the story.

You see, Maurice Bendrix became aquainted with couple Sarah and Henry Miles in 1940s England. Henry was not much of a husband to Sarah-more like a household friend. Bendrix (as he’s called throughout the story) and Sarah have an affair and are so much in love until one day Sarah just up and leaves. With no explanation.

I was still loving the story at this point. In my head I was “absolutely 5+ stars!!”

Two years later Bendrix runs into Henry and then starts to unfold what exactly happened. I was still on board here, right up until the end when strange things (the cause for Sarah’s ending the affair) begin to happen. I can’t talk about it without spoiling the entire story. But it just didn’t sit well and maybe I need a reread or find a discussion group to help me work through it.

My point is, I still love this story. Even with the ending being what it was. The worst thing about an audio book is not being able to tab or highlight quotes and passages. And there were so many in this book that I might just have to buy a copy and go back through it. I also thought Colin Firth’s voice might distract me while listening, because well it’s Mr. Darcy and such, but he was absolutely wonderful! His cadence, the way he changed the voices so subtly and added accents.

There are two movie adaptations. One from 1955 with Deborah Kerr and Van Johnson and the one I just watched made in 1999 with Ralph Fiennes and Julianne Moore. I have to say the casting was excellent. Ralph Fiennes plays jealous and insufferable very well. And the changes that were made in the movie were good and bad. The parts of the story I didn’t like were glossed over a bit or completely edited out, which I liked but it also left the depth of what Greene was trying to say at the end more shallow. So it’s a toss up. I guess I’ll try the older movie version and see what they did since it was closer in date to the original publication release.

Verdict: Go with the book first. It really is beautifully written and has elements that could spark a great discussion about marriage, life, love, God, fate. I will most likely pick up another Greene book and the movie really did do the story some justice- surprise, surprise.

And if any of you know any more narrated books by Colin Firth, please let me know! 🙂