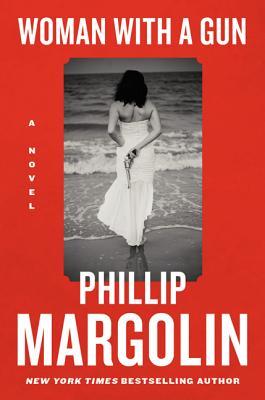 “Visiting an art museum displaying a retrospective of acclaimed photographer Kathy Moran’s work, aspiring novelist Stacey Kim is stunned by the photo at the center of the show—the famous “Woman with a Gun,” which won a Pulitzer Prize and launched the photographer’s career. Shot from behind, the enigmatic black and white image is a picture of a woman in a wedding dress, standing on the shore at night, facing the sea. Behind her back, she holds a six-shooter.

The image captures Stacey’s imagination, raising a host of compelling questions. Has the woman killed her husband on their wedding night? Is she going to commit suicide? Is she waiting for someone she plans to kill? Obsessed with finding answers, Stacey discovers that the woman in the photograph is Megan Cahill, suspected of killing her husband, millionaire Raymond Cahill, with the six-shooter on their wedding night. But the murder was never solved.

Drawn deeper into the case, Stacey finds that everyone involved has a different opinion of Megan’s culpability. But the one person who may know the whole story—Kathy Moran—isn’t talking. Stacey must find a way to get to the reclusive photographer or the truth may never see the light of day.” ~Goodreads

Woman With A Gun (December 2014) is a story within a story. First, you have struggling writer Stacey Kim’s encounter with a photograph that sparks her curiosity as well as the muse for a story she is desperate to write. Alongside her research to find out who this woman with a gun is, is the actual plotline of Megan Cahill (the woman with the gun in the photo) and how she came to be in the controverisal artwork. These two stories are woven throughout the novel in present and past form.

I haven’t read a book by Margolin before nor a thriller/mystery for some time and it was quite engaging. At times the duo stories felt jarring and I enjoyed the backstory of the mystery more then Stacey’s research. The big reveal wasn’t as shocking as I thought it would be but that doesn’t mean that I saw it coming. My theories were correct but how it was played out was clever and more involved. The number of characters introduced got confusing at times but necessary to build the story up to make the murder that more complex. I really liked how Margolin used an actual photo (originally taken by Leslie Jeter) and used it for his story as well as for the story in the book. Very clever!

For fans of contemporary thrillers and mysteries, give Woman With A Gun a read.

Thank you to Trish at TLC Book Tours for including The Daily Dosage on this tour and providing the ARC. Here is a list of the other bogs participating in the Book Tour.

3 thoughts on “Woman With A Gun by Phillip Margolin”