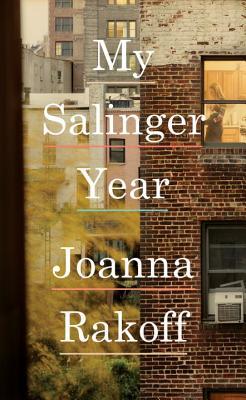 “Poignant, keenly observed, and irresistibly funny: a memoir about literary New York in the late nineties, a pre-digital world on the cusp of vanishing, where a young woman finds herself entangled with one of the last great figures of the century.At twenty-three, after leaving graduate school to pursue her dreams of becoming a poet, Joanna Rakoff moves to New York City and takes a job as assistant to the storied literary agent for J. D. Salinger. She spends her days in a plush, wood-paneled office, where Dictaphones and typewriters still reign and old-time agents doze at their desks after martini lunches. At night she goes home to the tiny, threadbare Williamsburg apartment she shares with her socialist boyfriend. Precariously balanced between glamour and poverty, surrounded by titanic personalities, and struggling to trust her own artistic instinct, Rakoff is tasked with answering Salinger’s voluminous fan mail. But as she reads the candid, heart-wrenching letters from his readers around the world, she finds herself unable to type out the agency’s decades-old form response. Instead, drawn inexorably into the emotional world of Salinger’s devotees, she abandons the template and begins writing back. Over the course of the year, she finds her own voice by acting as Salinger’s, on her own dangerous and liberating terms. Rakoff paints a vibrant portrait of a bright, hungry young woman navigating a heady and longed-for world, trying to square romantic aspirations with burgeoning self-awareness, the idea of a life with life itself. Charming and deeply moving, filled with electrifying glimpses of an American literary icon, My Salinger Year is the coming-of-age story of a talented writer. Above all, it is a testament to the universal power of books to shape our lives and awaken our true selves.” ~Goodreads

My Salinger Year (June 3) is a memoir that reads more like literary fiction. Joanna Rakoff’s first post-college job was working for the assistant who represented J.D. Salinger at the oldest literary agency in New York in the late ’90s. It was the last agency to even consider using a computer, agents smoked in the offices, writers were dedicated to their editors and agents – the place felt like you traveled back in time to a different era.

The memoir not only covered Rakoff’s extraordinary experience working at the agency but touched upon being young and what it meant to be starting out in a career, poor and eager. It was also a time where friends were getting married, had better paying jobs and moved to the suburbs while she was supporting her socialist boyfriend and jockeying for some credibility at a low-paying  job.

I, too, never experienced Salinger in school. I choose English Literature instead of American Literature and was never exposed to the admiration, love and controversy his books stirred up. But after reading this memoir, I want to run out and read everything by Salinger. The memoir is not only about the private and reclusive author, though. The entire book weaves in mentions of literary greats like Plath, Faulkner, Thomas, Hughes, Christie, Fitzgerald, Flaubert and numerous others. Books about books, authors, writing and the publishing world are such a pleasure to read and this memoir beautifully takes the reader along for the adventure. The only downfall is that I end up adding more titles to my ever growing TBR pile.

Here’s a lovely video from Joanna Rakoff explaining how she came about realizing who “Jerry” was.

*Thank you to Edelweiss and Knopf for an uncorrected reader’s proof. I was not compensated or required to review this book.

To learn more about Joanna Rakoff, her book and upcoming events, please visit her site here.

11 thoughts on “My Salinger Year by Joanna Rakoff”