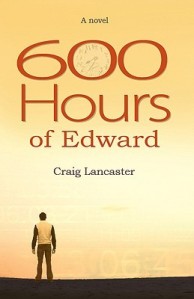 A thirty-nine-year-old with Asperger’s syndrome and obsessive-compulsive disorder, Edward Stanton lives alone on a rigid schedule in the Montana town where he grew up. His carefully constructed routine includes tracking his most common waking time (7:38 a.m.), refusing to start his therapy sessions even a minute before the appointed hour (10:00 a.m.), and watching one episode of the 1960s cop show Dragnet each night (10:00 p.m.).

But when a single mother and her nine-year-old son move in across the street, Edward’s timetable comes undone. Over the course of a momentous 600 hours, he opens up to his new neighbors and confronts old grievances with his estranged parents. Exposed to both the joys and heartaches of friendship, Edward must ultimately decide whether to embrace the world outside his door or retreat to his solitary ways.

Heartfelt and hilarious, this moving novel will appeal to fans of Daniel Keyes’s classic Flowers for Algernon and to any reader who loves an underdog. (Goodreads)

This has been on my TBR pile for quite some time after hearing various readers and authors rave about it. All I can say is “what took me so long?!” (It came out in 2009) I absolutely adored this story about Edward Stanton and how he navigated through life as a 39-year-old with Asperger’s syndrome and OCD.

As a special education teacher I have always had a soft spot for my students on the Asperger/Autism spectrum. They were always (and continue to be) my most challenging students but in the same breath, the ones that taught me so much. Match that with OCD and many of the idiosyncrasies that become grating on the nerves to most people, I found to be just another “trait” that made them special. I can’t explain it, but somehow I have always felt connected, understanding and patient with them. And as a teacher, I have often wondered what happened to my most favorite students and how they would fair into adulthood. Did those months we spent together help them prepare for the future? Have any of the coping mechanisms we worked so hard on stay in their “bag of tricks”? Did the parents continue to find them the best support system and medication if needed? Do they think of me as I often wonder about them? I think that 600 Hours of Edward depicts the most honest portrayal of what happens when these beautiful children grow up.

I nearly highlighted the entire book! I found myself laughing out loud at some of the situations Edward was in and how he processed the encounters. His honesty and realistic look on life made sense to me:

“I’ll start with the last day that everything was normal, or what I believed normal to be. That’s the problem with belief; if you rely on it too heavily, you have a lot of picking up to do after you find out you were wrong. I prefer facts.” I do too, Edward!

“Hate is an intense, burning blinding dislike. I think it is reckless to use words in an imprecise way, the way Joy-Annette uses them. I don’t hate lethargy. I just would prefer not to experience it.” <–right?!

The complaint letters? Hilarious and heartbreaking. I cried for him as he tried to have a relationship with a father who would rather hide him away and avoid embarrassment. I cheered him on when he made changes in his schedule to allow for new experiences and made new friends. I especially loved his working relationship with his therapist, Dr. Buckley. She was absolutely brilliant and it goes to show how the right support system can make a world of difference in someone’s life.

This is one of the best books I’ve read this year. I don’t understand how Mr. Lancaster did it. I am completely baffled and in awe of such phenomenal writing. Since I am in a state of query, I will now have to spend many hours looking him up on the internet and try to pick his brain. Please put this book on your TBR pile even if you have no interest in Asperger’s syndrome. It’s about…Compassion. Understanding. Tolerance. Empathy. Fearlessness. Friendships. Family. Acceptance.

*Exciting news is that the story continues four years later with Edward Adrift which was released April 2013!!

To find out more about Mr. Brilliant Lancaster, visit him here at: http://www.craig-lancaster.com/