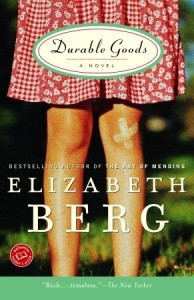 On the hot Texas army base she calls home, Katie spends the lazy days of her summer waiting: waiting to grow up; waiting for Dickie Mack to fall in love with her; waiting for her breasts to blossom; waiting for the beatings to stop. Since their mother died, Katie and her older sister, Diane, have struggled to understand their increasingly distant, often violent father. While Diane escapes into the arms of her boyfriend, Katie hides in her room or escapes to her best friend’s house—until Katie’s admiration for her strong-willed sister leads her on an adventure that transforms her life.

Written with an unerring ability to capture the sadness of growth, the pain of change, the nearly visible vibrations that connect people, this beautiful novel by the bestselling author of Open House reminds us how wonderful—and wounding—a deeper understanding of life can be. (Goodreads)

You know those books that you simply love and wonder if they will be as good as a re-read? I first read Durable Goods about five years ago after reading The Day I Ate Whatever I Wanted for a book club. I instantly became an Elizabeth Berg fan and she is one of my all time favorite authors. How could I have not mentioned of any of her books on this blog?! So, when looking over what I have read by her and which one to review, I decided to re-read Durable Goods since it left an impression the first time. This was Berg’s debut novel and was named the 1993 American Library Association Best Book of the Year and re-reading it was a pleasure the second time around.

This is a coming of age story about 12-year old Katie Nash in the early 1960s. I don’t know how Berg pulled it off, but Katie’s young narrative voice is so authentic, heartbreaking and witty as she navigates being a pre-teen, an abusive father and losing her mother at a young age. The story quickly pulled me back to a time with no cell phones or internet and days were spent being a kid; that time where we teetered between innocence and “knowing the truth”. There wasn’t much of a story but Katie’s descriptive imagination felt like poetry.

“I used to stay near my mother when she hung out clothes. I made people out of the straight wooden clothespins, the ones with rounded heads. I didn’t like the spring-type ones, which could surprise you with their meanness.”

Katie’s moments spent under her bed talking to her mother were heartbreaking and moving. I loved how insightful she was becoming due to her age, mother’s death or because she experienced so much from traveling around. Maybe it was all three.

“I understand suddenly that everywhere in the world are people with secrets too much to be told: a man in China; a woman in India, bending down at the river; a baby too young to speak. I see that things get delivered, invisible and long-lasting and created for reasons felt but never said. “

I lived close to a military base/post growing up and had numerous friends that came in and out of my life from Kindergarten through High School. We would get so close and spend many memorable moments together for a few years and then they would leave. We would promise to write letters and keep in touch during a time when the only means of communication were letters and calling on the one house phone with the curling 10-foot cord. Phone calls were out of the question so we tried to keep up with written correspondence and then our friendships would fade away. I never understood how difficult it was having to move so often and this story really resonated with me.

“Sometimes it aches so hard, the thought of all you can’t have anymore, your desk the third in the third row, the place where you buy licorice, the familiarity of the freckles on your friends’ faces, the smell of your own good bedroom. You will have to be the new girl again, the one always having to earn things.”

After re-reading this quick, delightful story, I was struck by how this book first published twenty years ago (1993 then again in 2003) was free of vulgar language, gratuitous violence and sex scenes and deemed a YA book. Why is that? Has our culture changed so much that we need more and more risqué subject matter to hold our attention? I am not in denial. I know times have changed but this story was a refreshing reminder in how to evoke emotion without trying too hard. I am not sure if it is suitable for my 11-year old just yet or would even interest her without the mention of texts and Tweets. But in a year or two I will definitely introduce her to the amazing works of Elizabeth Berg with Durable Goods.

*Several years ago I had the pleasure of meeting Elizabeth Berg at a book reading and signing. More than being a fantastic writer, she proved to be a witty, down-to-earth woman and the kind of person you would love to chat with for hours. You can visit her author page at http://www.elizabeth-berg.net/. Or hop on over to find her on Facebook. She has some of the best posts I’ve ever read; like reading her beautiful books.

** I almost forgot! There are two more books that follow Durable Goods; Joy School and True To Form. There are no cliffhangers and each book can stand alone without reading all three. Just wanting to know what Katie Nash is up to and following her journey into self-discovery will be enough to entice you as a reader.